It has taken me eight months, since we moved to Phoenix, to get my studio in order.

It’s not s huge space as art studios go, but I have managed to divide the space into “zones” for easy work flow. An area to gesso and varnish, and area to work on my laptop and draw and the most important of all, the area to paint.

The last thing to tackle was my lighting. Up to this point I have been experimenting with different bulbs in the existing ceiling fan; too dull, not enough coverage, spot lights on tripods; too strong with excessive glare, and did I mention tripping over tripods?

I’ve finally came to the conclusion that I should steal John’s idea of using long LED lights in his wood shop.

These lights are available, special order from Rockler Woodworking, and they put out a wonderful stream of  5500 lumens of bright light with no shadowing. 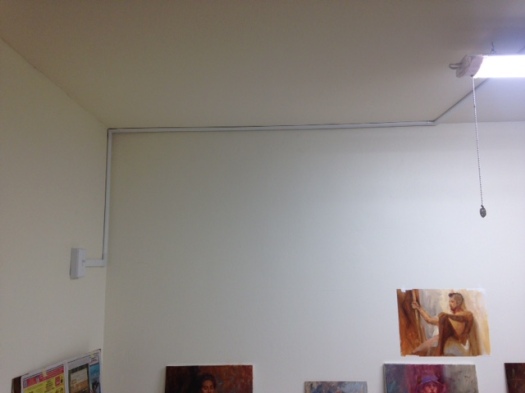 Because of previous remodels to this house, there was no way John could run any electrical inside the walls, so he tapped into an existing outlet, which the previous owner used for a wall mounted TV. Running the wires inside surface moulding, up to the ceiling than across to an electrical outlet he mounted on the ceiling. 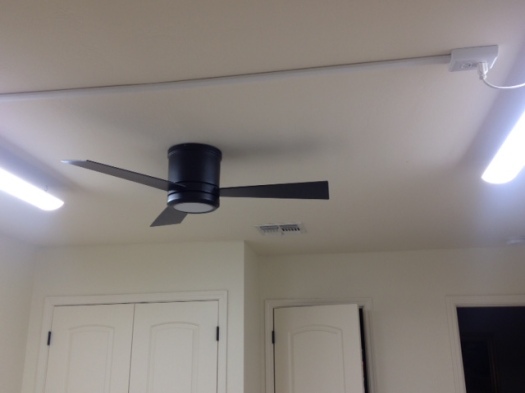 Both light fixtures plugged into this outlet on the ceiling. Both lights can be turned on at the switch on the wall or turned on individually by the pull chains.

The whole project came in at under $250. (free labor), which was well worth it.